Develop and test your code directly in Kubernetes using Okteto

Okteto is an open source tool to develop and test your code directly in Kubernetes. This guide willl walk you through deploying Okteto on a Kubernetes cluster running on Civo.

Systems based on a microservice architecture have many advantages like scalability, resilience, fault tolerance and so on. But they are also harder to set up locally as a development environment due to their very nature. You need to run several services with different runtimes on your local workstation. Also running these multiple services will eat away at the available computer resources.

Kubernetes has become the industry standard to run production workloads. But developing in Kubernetes presents some challenges. Typically, you would finish writing your code and package it in a Docker image, push that image to a registry, followed by pulling the container to your cluster for deployment, checking everything works as expected, and then repeating the process for new code. This is not only slow and tedious, but it means that it would be difficult to take advantage of useful features of tools such as debuggers, immediately-visible changes on reload, and the like.

Solution - a Development Platform in the Cloud

Okteto is an answer to your problem. Okteto transforms your Kubernetes cluster into a fully-featured development platform. It allows you to develop and test your code directly in Kubernetes while taking full advantage of tools like Maven and Gradle, popular frameworks, hot reloads, incremental builds, IDE debuggers and so on.

NOTE: This guide focuses on developing a Java application on Kubernetes, but there are other guides to develop with your favorite programming language such as Node, Python, Go, Ruby, etc.

Before you begin, you will need following things: - Code Editor/IDE - kubernetes cluster - KUBECONFIG file pointing to your kubernetes cluster, where the application will be deployed. - kubectl to communicate with your cluster.

*If you don't have a Kubernetes cluster ready, why not sign up to Civo for the managed Kubernetes to try this out for yourself!

Get the source code of our sample Java app.

Lets deploy it on Kubernetes.

Your sample Java application is now running on Kubernetes.

The Okteto CLI allows you to develop your applications directly in Kubernetes while taking advantage of well-known tooling for your particular choice of language. For Java, these include Maven/Gradle, Spring Boot and your favourite IDE's debugger functionality. It also speeds up our development cycle instead of going through the typical development workflow described above.

Install the Okteto CLI by running the following command:

You can also install via brew by running:

Download the executable and add it to your $PATH.

You can also install via scoop by running:

Alternatively, you can directly download the binary from GitHub.

With the sample Java application deployed as above, run the following command:

The command okteto up starts a Kubernetes development environment, which means:

You can customize the way Okteto manipulates your code, using okteto.yml manifest file. You can also use the file .stignore to skip files from file synchronization. This is useful to save you from synchronising data that doesn't need to be moved.

The first time you run the application, Maven will compile your application. Wait for this process to finish.

Okteto automatically forwards port 8080 from your local computer to the remote development environment, making it accessible via localhost. Test your application by running the command below in a local shell:

Or visit http://localhost:8080 on your browser. You should see the text "Hello World!" like in the image below:

Open src/main/java/com/example/demo/RestHelloWorld.java in your favorite local IDE and modify the response message on line 11 to something else like to Hello world from the cluster!. Now save your changes.

As soon as you save the code, your IDE will auto compile only the necessary *.class files that will be synchronized by Okteto to your application in Kubernetes. Take a look at the remote shell and notice how the changes are detected by Spring Boot and automatically hot reloaded. Please note that to enable Spring Boot hot reloads you need to import the spring-boot-devtools dependency in your application, which in the case of this tutorial, we already did here.

Call your application to validate the changes:

Great! Your code changes are instantly applied to Kubernetes. No commit, build or push required! 😎 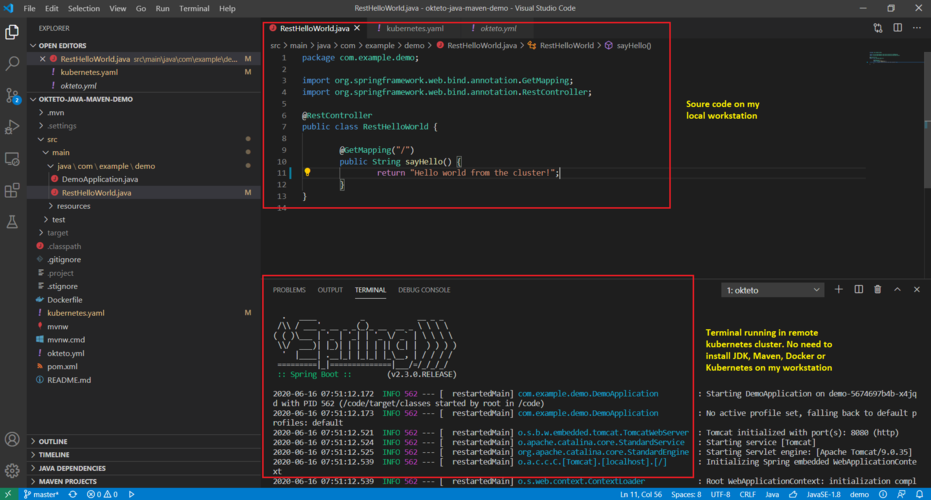 The end result is that the remote Kubernetes cluster seems local to your workstation. When you edit your code on your workstation and as soon as you save it, the changes go to the remote cluster and your app instantly updates (taking advantage of any hot-reload mechanism if present like Spring Boot hot swapping in our case). This whole process happens in an instant. There is no need to build any Docker image or apply any Kubernetes manifests. All of this is taken care by Okteto.

Okteto also allows you to debug your applications directly from your IDE. Let’s see how it works in VS Code. To enable debug mode, define the following as a as JVM arguments in your Maven configuration files: 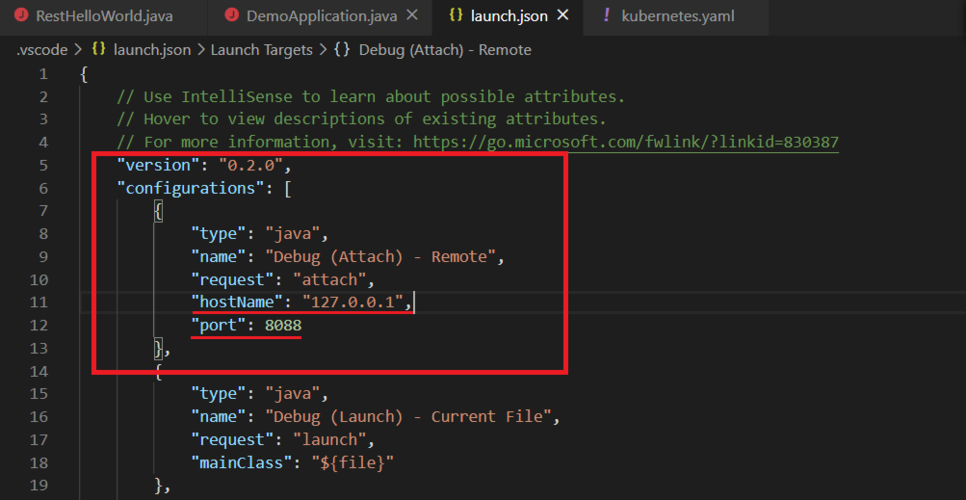 Now, add a breakpoint in your code and click on Run Debug. Go back to the browser and reload the page. The code execution will halt at your breakpoint. You can now inspect the code, trace the function calls, look at available variables, and the like. 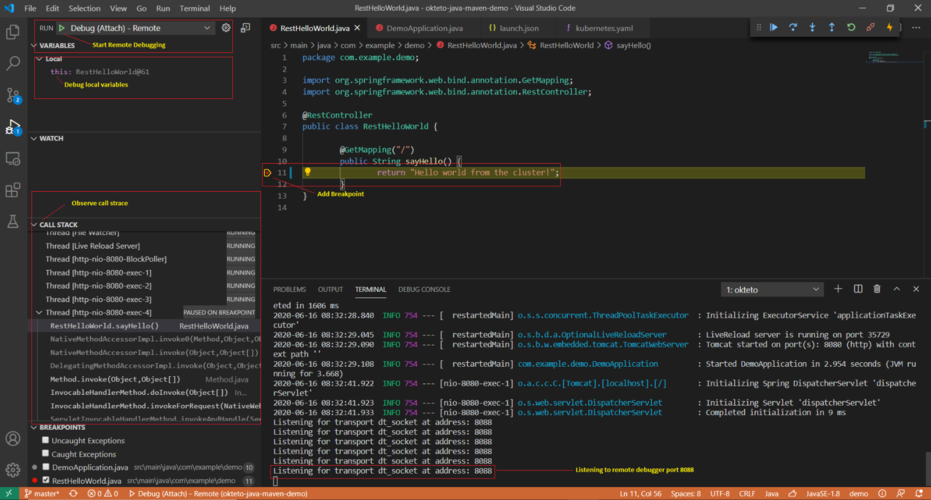 So the code runs in remote Kubernetes cluster, but you can debug it from your local workstation. 😉

Once you are done with the development, run the okteto down command. It deactivates your development environment, stops the file synchronization service and restores your previous deployment configuration.

Okteto transforms your Kubernetes cluster into a fully-featured development platform. It lets you develop your applications directly in Kubernetes. This way it helps in lot of different ways:

Guide to Helm 3 with an Express.js microservice

In this guide you'll learn how to create your own Helm Chart with Helm 3 for an Express.js microservice. 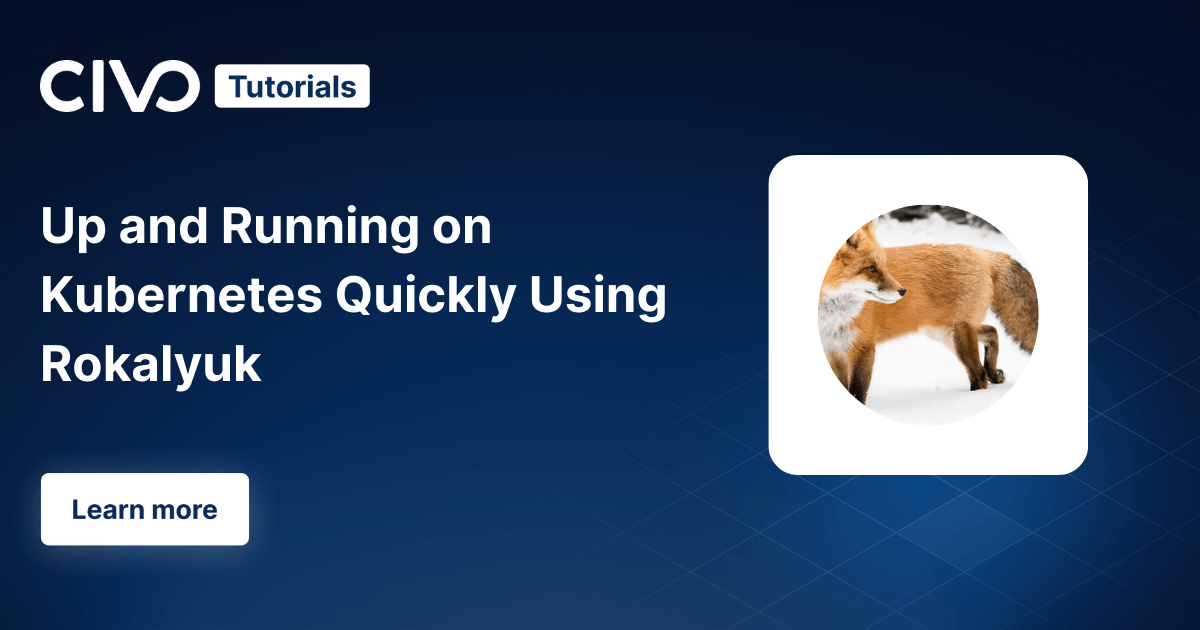 No one wants to write dozens of manifest files just to publish a static website. Rokalyuk can make that simple for you!