Guide to Helm 3 with an Express.js microservice

In this guide you'll learn how to create a Helm Chart with Helm 3 for an Express.js microservice.

Developers adopting Kubernetes often turn to helm to find pre-packaged software with a single command. Software is packaged in charts which allows for customization at install time and for lifecycle management such as upgrades and removal of software.

Up until recently Helm 2 also shipped with a server side component called tiller. Unfortunately tiller was insecure by default and left many clusters vulnerable to attack. Steps were published by the project maintainers to manually lock-down access, but it was too late and so there is now a mix of Helm lovers and haters in the world.

Helm 3 aims to consolidate developers by simply removing the tiller component. The logic that controlled updates and removal is now run at the client-side and only minimal state is retained with the cluster. In this guide we'll be using Helm 3, but if you have to use Helm 2 for some reason, then the steps will be largely the same.

In this guide we'll add a Helm 3 chart to the express.js sample application which has two routes - one to render a webpage and one to render links from a JSON API call.

This sample application was used in a previous guide: Get a TLS Certificate For Your Application With JetStack's Cert-Manager. Today's guide differs in that we'll focus primarily on packaging the application with Helm and will skip the production deployment and domain-name configuration.

Get a Kubernetes cluster

If you're a part of the #KUBE100 program, then create a new cluster in your Civo dashboard and configure your kubectl to point at the new cluster.

If you are not yet a member, but would like to join, sign up here. Mention your desire to try out this guide and we will fast-track your application.

Alternatively, you can use any other Kubernetes cluster, or if you are on Civo already but not in #KUBE100, then create a new Small or Medium Instance, then use k3sup ('ketchup') to install k3s.

Before going any futher, check that you are pointing at the correct cluster:

If you're using MacOS or Linux simply run the below:

If you're a Windows user, then install Git Bash and then run the above in a new terminal.

Search for a chart:

You'll notice that sometimes there are various versions of a chart. The stable repository is generally the upstream or main choice that you'll want.

It turns out that the Helm team decided to remove the stable repository which was generally used to install charts. Let's add it back in:

Now install a chart for postgresql which is part of the stable repo:

View the Chart README to find out what options are available.

I'm setting persistence.enabled=false so that no volumes will be created, we don't need them for testing.

Create a table and select from it:

Now you can remove the chart:

An introduction to Helm templating

We already have some static YAML manifests in the repository, but Helm allows us to use Golang's template language to replace values at deployment time.

For me templating is a core part of the value of Helm. Let's look at why we need it.

Here's an ingress file that has a hard-coded hostname of the website users will navigate to, in order to see our code.

Users now need to fork our YAML files and maintain their own version, or they have to edit just before deploying. Neither of these scenarios are ideal.

Templates can be overridden in two ways:

If you're using Civo's k3s service, then k3s pre-installs Traefik as the IngressController instead of the more common option: Nginx.

The Cloud Native Computing Foundation (CNCF) hosts the Kubernetes project, and fosters a broad ecosystem. There are pros and cons to many competing projects however, on the one hand we have choice, but on the other we have to make more decisions and configure more tools.

We now need to add a new template for the IngressController to change between nginx and traefik for different users and environments:

Remove any sample / pre-made charts with:

Now create your own:

You'll get some sample files you can edit:

The chart comes with samples that we can edit. Your task is now to translate our plain YAML files with hard-coded values into the sample templates that were provided via helm create.

We have 5 files in our plain YAMLs:

Start with the dep.yaml which adds the Kubernetes Deployment, then work your way through each of the other files.

The generated templates do come with some values already set for us, so we just need to fill in or update the remaining entries. I find Visual Studio Code useful for this and I open the plain YAML on the left and then the templated file on the right. 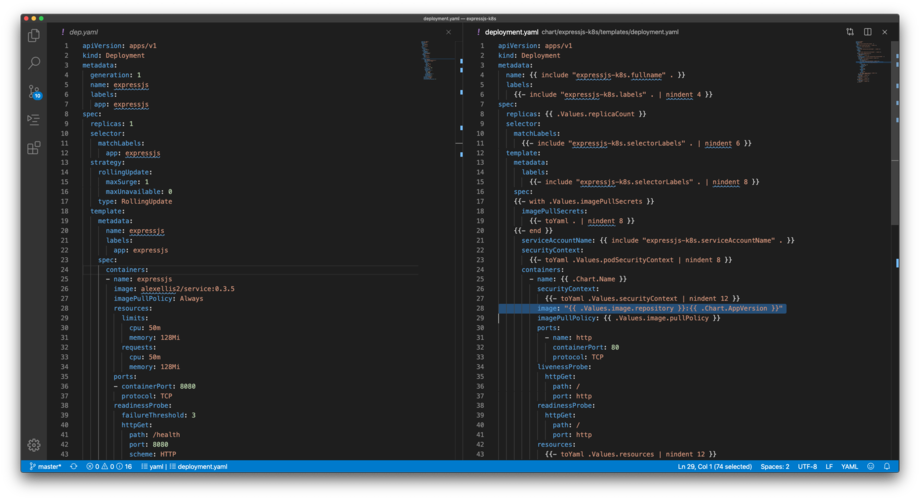 I've highlighted the image: name which corresponds to the Docker image. This has been templated automatically, but before we used a hard-coded value in our YAML file. Remember that templated values come from one or two places: either --set command-line variables or values.yaml

Open values.yaml and start customising it as you go along.

If this all feels overwhelming, take courage, Kubernetes is a very complex system and it does take time to master. Begin today with your first chart, and after a few of them, it should become easier for you.

After installation the NOTES.txt file will print out some hints on how to use the service, you can customise this with Go templates or simply remove it if it's a bit too much to take on. In the postgresql example it was the NOTES.txt file which instructed us how to connect to postgres.

Charts can be published to either an S3 bucket or a GitHub repository using GitHub pages, but before that we need to test that everything operates as expected.

You can see that I updated NOTES.txt to print out some useful hints on how to test the application. 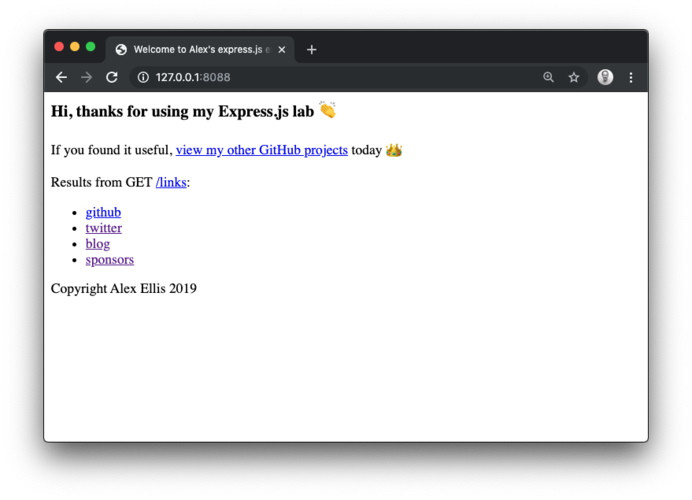 You can run this command as many times as you need until everything works exactly as you expected it to.

Test our chart with ingress

Now you can test the chart with ingress, which is what we looked at earlier. We needed a way to dynamically switch the domain name and the IngressController.

We can do this via passing --set to the install/upgrade commands or by editing values.yaml.

You can also maintain several YAML files with overrides like values-staging.yaml or values-prod.yaml - just add --values FILENAME.yaml to your install/upgrade command.

Let's edit the values.yaml file instead:

Now if you look for Ingress records in the cluster you'll find the new one:

You could go and buy a domain-name and then set up a proper DNS entry, but for testing purposes we can make that easier. Find the public DNS entry for your Civo cluster, or the IP of one of the nodes in the cluster through your dashboard.

Now we can use our IngressController to test out the Ingress record created by the Helm chart.

If you do actually want to create a real domain for this service, just register a domain and add a DNS CNAME or A entry to the DNS name or IP address of your Kubernetes cluster. For more help, please feel free to reach out to the team on Slack.

The next step after creating a useful application is for you to publish that so that other users or other team-members can consume the chart.

The two most popular options are:

Replace alexellis with your username and expressjs-k8s with your repo and helm chart name.

Add the files and do a commit, then push up to GitHub.

Now we need to enable GitHub pages to publish the docs folder via the Settings page for your repo. 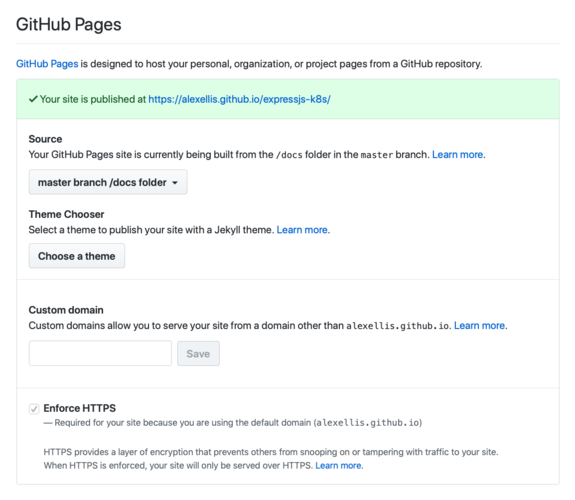 Now we can remove our testing app and in the next step we can install it from the published repository.

Install the chart from the repo

You can now add instructions for how other users should consume your chart.

Every time you update your chart, you must edit the Chart.yaml file and bump up the version, this is so that when you run make charts a new version of the chart can be generated. If you bypass this step then clients won't know if they can upgrade or not.

Now run make charts, do a git commit and push that up to the origin.

You can now run helm repo update and check that the version of the chart was updated:

Now you can update your installation with: helm upgrade test-app expressjs-k8s/expressjs-k8s and a new version of the code will be downloaded.

We started off with plain Kubernetes YAML manifest files with hard-coded values for the Docker image and IngressController type and domain-name. By installing Helm 3 and applying Golang templates we were able to make the chart more versatile and flexible. After publishing the chart to GitHub Pages we then were able to share the chart with other users and publish version updates.

It's important to add a good README.md file which explains each --set override that's available and what users are likely to want to tweak.

Two of the charts I maintain on a regular basis are included below for your perusal:

You may also find that some Helm charts are not yet ready for Helm 3 and still need to be installed with Helm 2. Over time I would expect all charts to be migrated over, but since Helm 3 only went GA at KubeCon in November 2019, it's still early days. One of the original Helm founders (Rimas Mocevicius) wrote a plugin called helm-2to3 which can help you migrate charts that are lagging behind.

You can also apply for the #KUBE100 program if you'd like to try Managed k3s. Have you been using Ingresses since Kubernetes 1.19 and below? Then you will need to migrate your Ingresses before Kubernetes 1.22, and this guide covers the migration path.