Using Civo Kubernetes to gamify Twitter with Prometheus and Grafana

It started with a Tweet from Julien Pivotto (@roidelapluie): He had created a setup that enables you to graph your Twitter followers with Prometheus and Grafana via json_exporter. This is available on Github.

I wanted to extend this creativity by automating my Twitter banner so that it would display the Grafana panel. It also should update this automatically every n-period - in my case, every minute. This way I have a little gamification for my followers. If one would follow me, the graph should go up at the next update interval. Seems pretty neat!

Since I want to automate this, and not run it on my computer, I needed a solution foundation. So I've made a few requirements for myself:

This brought me to Kubernetes as an orchestration platform. Now you could wonder: is this not over-engineered? Then I would say yea, maybe. This whole setup is over-engineered and not the most solid solution for our use case. However, it is so much fun, and a great platform for learning things about Kubernetes!

As Civo delivers a Kubernetes platform with k3s, using them makes a lot of sense. In contrast to different offerings such as EKS, AKS, and GKE, this is much simpler and easier on your wallet. Now there are solutions that remove some technical management overhead such as Google's Autopilot clusters or AWS ECS and Fargate. However, we then also lose a lot of control, and in order to know what you are doing you need to be in control.

I strongly believe Civo's k3s solution is the middle ground between a full-blown Kubernetes setup vs an abstracted Kubernetes offering.

As the solution I have is overkill from an engineering standpoint as mentioned above, this guide isn't intended to be followed word-for-word but rather as an inspiration in case you want to try something like this.

You would need a Kubernetes cluster running on Civo, as well as needing to be familiar with the components of the stack used below.

I have made a GitHub repository with a configuration I used in case you want to get stuck in with the configuration. The repository's readme describes the configuration elements you would need to change, as well as how to apply it to a running Kubernetes cluster. Keep reading for more information about how the project came about.

So I had a pretty solid idea of how I wanted to set this up, and with which tools and projects. 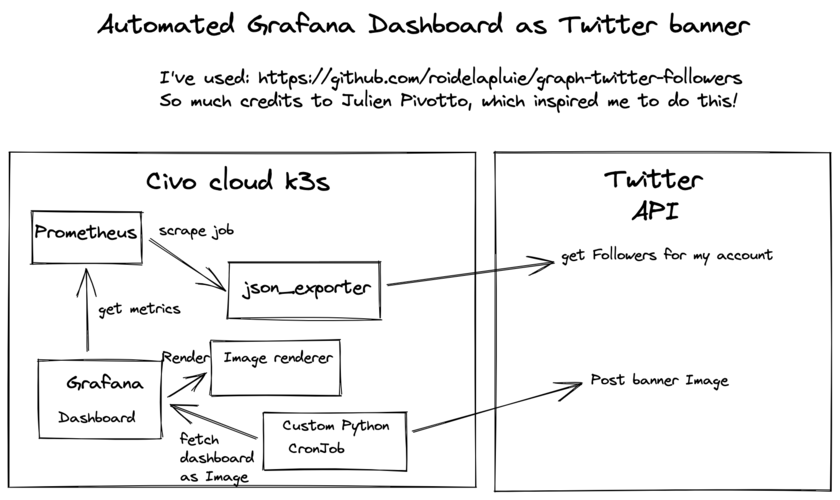 Let's go over each part

Prometheus, a Cloud Native Computing Foundation project, is a systems and service monitoring system. It collects metrics from configured targets at given intervals, evaluates rule expressions, displays the results, and can trigger alerts when specified conditions are observed.

The Prometheus Operator provides Kubernetes-native deployment and management of Prometheus and related monitoring components. The purpose of this project is to simplify and automate the configuration of a Prometheus-based monitoring stack for Kubernetes clusters.

There is also a project called kube-prometheus. This provides example configurations for a complete cluster monitoring stack based on Prometheus and the Prometheus Operator. It includes deployment of multiple Prometheus and Alertmanager instances, metrics exporters such as the node_exporter for gathering node metrics, scrape target configuration linking Prometheus to various metrics endpoints, and example alerting rules for notification of potential issues in the cluster.

In short, we can leverage the kube-prometheus project to create a solid setup without too much work from our end. Especially for a hobby project, this works perfectly.

I would recommend that if you are going to run this in production, you should should understand each component and not just run a kubectl apply -f magic.yaml. Please be aware of what everything does and how you can maintain & sustain it over a longer production time.

Lucky us, Grafana is included in the kube-prometheus project. However, let me quote their information for those who are yet unaware of what Grafana is:

The open-source platform for monitoring and observability.

Grafana allows you to query, visualize, alert on and understand your metrics no matter where they are stored. Create, explore, and share dashboards with your team and foster a data-driven culture

It means we can use Prometheus as a data source for Grafana and query our metrics. This then allows us to create beautiful graphs, visualizing our metrics.

The json_exporter project is an exporter for Prometheus. There are many exporters available to 'extend' Prometheus. For example, there is one for Windows, Elasticsearch, MySQL, and the list goes on. Feel free to check out the prometheus-community list of repositories.

We can leverage this project to parse the Twitter JSON API output to metrics that Prometheus can then scrape.

An example of parsing would be the following. Taking the JSON:

Which, with the proper configuration, can be converted to these metrics:

Since Grafana 7.x, Grafana needs an external image renderer to render dashboard panels into images. This can be used for alerts. For example, Grafana triggers an alert, it can send an image showing the state of the graph it alerted on. We can also leverage this functionality to create images of panels on demand.

The integration is fairly simple. One should create a deployment which can be fairly basic such as:

Next, we should expose this deployment via a service. Either via running kubectl expose or create an svc by hand.

As the final step we have to extend our Grafana deployment with two environment variables to make Grafana aware of this remote image renderer:

If we got Prometheus running and scraping, we can then visualize the data. We can also do a GET request to Grafana to create an image for us. However, we need to automate this.

Every minute we want to:

Now my preferred way to program/automate things is via Go. However, I could not find an SDK or wrapper for the Twitter API that exposed the Twitter user's banner endpoint in Go. Hence I googled further and found out that there was a Python project called tweepy that did!

Now I'll be honest here, if I would be making something in Go, I would have made it pretty sweet. An application that ran indefinitely with a custom timer that fetches an image and checks if everything was sane. I'm new to Python and I did not want to put too much effort into it before seeing if it would work.

Therefore I've created it in a way that it would be fire & forget. It would just do a thing and be done with it. It is the following code:

I will admit that it's not great in multiple ways:

However, since we are just doing fire & forget about it:

For a hobby project, "it's fine". If one should use this in an actual environment, one should create a Grafana API key and call Grafana in such a way, so that credentials are not exposed internally. Adding more sanity checks and other improvements would very much be necessary.

Regardless, I've created a Docker image for it and created a very simple Kubernetes job that looks somewhat like this:

It would create a pod with my image every minute.

The stack consists of various cloud-native components. This is great because it often removes certain aspects such as storage. For example, Grafana dashboards are created via our infra-as-code and are stored in git. They are applied as Kubernetes configmaps and mounted to Grafana to use. Any other configuration works the same way. Our Prometheus scrape targets are done via ServiceMonitors, which are stored on k3s. Static targets via configmaps in our PrometheusSpec;

We still have to store data for Prometheus. It's fine to use our k3s hosts to store a little bit of data. I have limited the storage of Prometheus so I don't run into any node disk issues.

The great thing is that there are cloud-native solutions to this. For example Cortex and Thanos. If we pick Thanos as an example:

Thanos is a set of components that can be composed into a highly available metric system with unlimited storage capacity, which can be added seamlessly on top of existing Prometheus deployments.

So, instead of working with (often) expensive disks, we can leverage these cloud-native components for great solutions. Object storage is cheap, easy to use, easy to manage. Either way, we can use Minio on Civo (see Guides for minio) or use any other object store solution.

If this has inspired you to try out exporting a Grafana dashboard to a Twitter banner or anything else, be sure to let me as well as Civo know on Twitter. If you have any questions about any part of the stack that you would like clarification on, you can ask the friendly community in the Civo Slack.

Once again, the repository can be found on GitHub for you to get stuck in, but just to reiterate, this is intended as a fun hobby project and not for production usage as it stands.

If you enjoyed this and want reach Wiard or Fullstaq, reach out to them on twitter or visit www.fullstaq.com.

Fullstaq is a fast-growing cloud-native IT Services company that helps both start-ups and enterprises realize their Kubernetes ambitions. 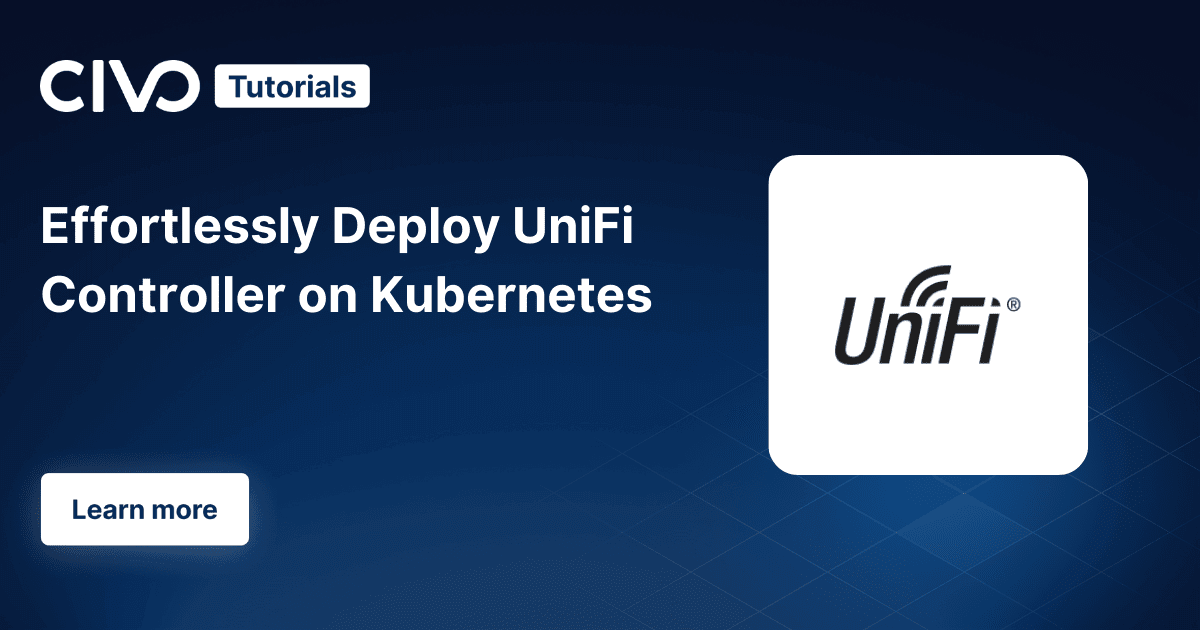 Learn how to deploy your UniFi Controller to Civo managed Kubernetes