In the current digital environment, networks play a vital role in connecting us to the world. One of the key building blocks of networking is Internet Protocol (IP) packets, which allow us to share information and resources seamlessly. This tutorial will dive into the basics of IP packets, including what they are, how they're structured, and how they're used to enable communication across networks. We’ll also take a closer look at the role of IP packets in the role of IP packets in Kubernetes, such as the individual components and benefits.

Everything you need to know about networks

Before we look into the theory surrounding IP packets, let's take a step back and think about what we are trying to achieve in general terms. Networking is about communication, sharing information, and sending and receiving messages and data.

Imagine you want to send a simple message, like "Hello world," to a friend. If you had to start from scratch, you might set up a circuit with a switch on one end and a light or buzzer on the other. This way, you could send messages using Morse code by flashing the light on and off to represent different letters. You could send and receive messages by adding more switches and lights if we expanded the circuit. This is similar to what happens with networking but with more advanced technology. Now we can send more complex messages to more people with concepts like addressing, switching, routing, and encryption. The internet made networking global and more complex, but the basic concept is still the same.

An introduction to IP packets

What is an IP packet?

In most computer networks, data is broken down into small units called packets and sent between devices. The same holds true on the internet. Each packet has a specific structure, defined by a protocol, that allows the recipient to understand the packet's contents. An IP packet is a unit of data in a network that contains information about the source and destination addresses and other control information needed to transport the packet over a network.

The process involves a router that connects the local network to the internet receiving the IP packet and reading the destination address. The router then determines the next destination of the IP packet based on its list of reachable routes, popularly known as a routing table. This way, the IP packet travels from one router to another until it reaches its destination.

The structure of an IP packet

Several fields in an IP packet header help route and deliver the packet to its desired destination. Below we have outlined some of the different fields involved in the process: 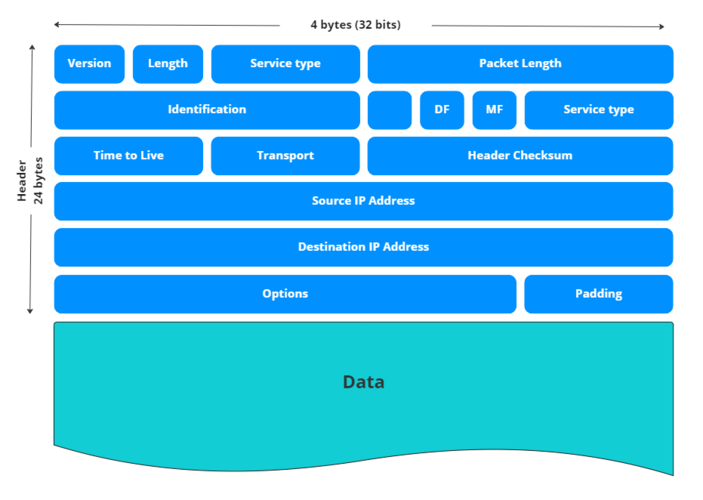 The benefits of using IP packets

The role of IP packets in Kubernetes

Kubernetes components detailed below communicate with each other with the help of IP packets:

When creating or updating a container, the API server sends IP packets to the cluster's key/value data store (commonly etcd) to store the updated information. The IP packets also help cluster components on each node communicate with the control plane API server and the etcd datastore to update the status of containers running on that node. Pods and nodes have unique IP addresses, which allows them to communicate with each other.

Kubernetes services have virtual IP addresses that pods use to connect with them. Pods associated with a service communicate with each other using the service IP address. Pods outside the service node can still communicate with them using IP packets transmitted through overlay networks that create a virtual network over the physical infrastructure to allow communication between pods across nodes. A network plugin such as Calico or Flannel must be installed to create an overlay network, as a Kubernetes cluster does not include one by default. Therefore, it is important to choose and install a network plugin that meets your needs to manage the networking between pods and services.

This tutorial has shown us that IP packets play a crucial role in transmitting data from one device to another. The header of a packet includes several fields that aid in routing and delivering the packet to the intended destination. The use of IP packets is essential for communication between various components in a Kubernetes cluster. IP packets bring many benefits, such as improved network performance, scalability, load-balancing, and observability in a Kubernetes deployment. With this understanding of IP packets, we can move on to the next part of the series, IP Addressing.

Introduction to DNS and domain names and their DNS record types

From CNAME TXT records - There's lots of coded labels for different DNS record types, let us explain what they mean and how DNS works.

Getting started with Kubernetes

Understanding binary is essential to computer science and computing in general and yet today is something that many in the industry do not have a solid grasp of.