With Civo Academy, learn how to install Minikube on your local Kubernetes cluster and how to explore the Kubernetes dashboard.

With Civo Academy, learn how to install Minikube on your local Kubernetes cluster and how to explore the Kubernetes dashboard.

How to Install Kubernetes Minikube

The next step is installing the minikube. Now minikube, like we mentioned previously, is a local Kubernetes cluster, focusing on making it easy for you to learn and develop Kubernetes for testing purposes. Some of the prerequisites that you can see over here are regarding your system resources, for example, 2 CPUs or more, 2GB of free memory, 20GBs of free disk space, an internet connection for obvious reasons, and a container or a virtual machine manager. I will be using Docker. You can also use something like a VirtualBox or similar.

Now to install, go to https://minikube.sigs.k8s.io/docs/start, and you can install minikube related to your particular operating system and the architecture. For example, I will be using macOS, and I'm on Apple silicon. So, I'll be using the ARM architecture to copy and curl this particular command to get the binary executable. I'm going to download the binary and will install it. You will not get a command if you are a Windows user. Instead, you can download the latest release from the minikube Windows AMD64.exe system. 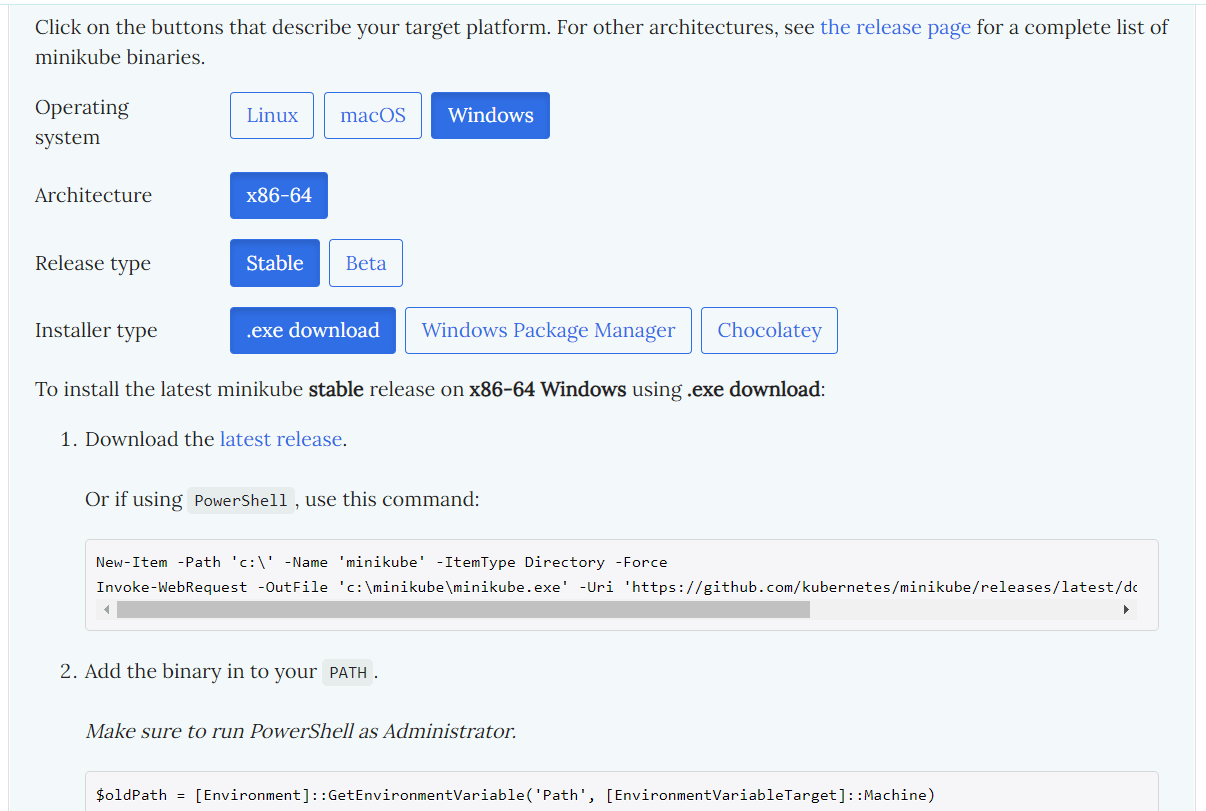 You can download it from here, and you can rename it to something like minikube.exe, and then you can add it to your path, and it will work similarly. Let's try to validate this now. With the command minikube version you can see it's particularly running, and now we're ready to give our cluster a spin.

Let's look into a few more things related to minikube and how we can start minikube on our Kubernetes and spin up a Kubernetes cluster using this. So the folks behind minikube made this thing very easy to use. All you need to do is execute one single command. So Minikube will start a virtual machine locally and deploy all the necessary Kubernetes components into it. This VM will get configured with Docker and Kubernetes via a single binary known as the local Kube. So you can use the command minikube start and I have Docker running over here, so it's going to be using that. But if you're using VirtualBox, use something like a VM driver equal to VirtualBox. So let's start it as it is.

When we are doing the minikube start command, it creates a new virtual machine based on the minikube image, containing a few binaries. It has both Docker and RKP container images and a local cube library. RKP is an application container engine developed for modern production cloud-native environments, and the local cube library includes all the necessary components for running Kubernetes.

Also, I want to share that you might experience some problems with VirtualBox for Windows OS. That's the case you can use Hyper-V instead, you can open up a PowerShell admin window and execute the Get-NetAdapter command, and all these things will be running for you. So if you're using Windows, you can also follow this particular process and then go ahead and get started with it. I showed you all the other commands like minikube start and the VM driver. In this case, as VirtualBox fuses Windows, you can add something like Hyper-V.

But suppose you want to see the verification and look at the status of the cluster. In that case, you can use the command minikube status and you will see Kube configured, API server kubelet, host, and type control plane, and everything listed over. So now our Kubernetes minikube is running, and it is initializing a Kubernetes cluster as well. It even configured kubectl to point to the newly created virtual machine.

Let's also explore the Kubernetes dashboard. So if you type this command called minikube dashboard, we will be automatically redirected to a particular URL that you can see on the screen.

Here you can see a Kubernetes dashboard. So you can see I have a few deployments running, and, you know, you have a nice thing that you have in your UI. Feel free to explore the UI, but don't take too long if you're a beginner because we'll be diving more into the concepts in the future videos. So we'll learn about all these other objects that, you know, all the other Kubernetes components, and then the UI will start making much more sense. Thanks a lot for watching.

Don't stop now, check out your next lesson