In the past using iptables was common as the main way of firewalling an instance. In Civo we have a firewall built-in ready for you to use. Or you can still run a firewall inside the machine, using Ubuntu's easy-to-configure UFW.

This instruction tells you that by default the system firewall is an "allow anything in" type of firewall. If you create a new firewall by clicking the "+Create firewall" button, you'll then get a popup to enter a name for the new firewall: 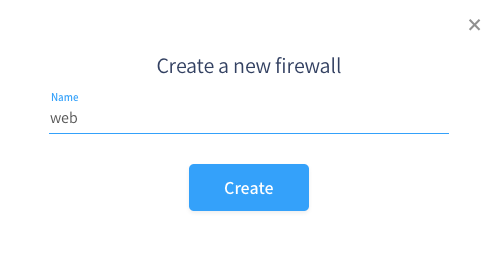 After typing a name and clicking "Create", it will create the firewall and list it along with two buttons. The first button lets you manage the rules for this firewall, the second one deletes it.

You should then click on the rules button and you can complete rules and click the "+" button to add them.

After that you can now choose this firewall when creating a new instance or you can click to view an instance and change the firewall from there. The first step in installing and configuring Ubuntu is to update the list of packages available from the repository. So SSH to your instance and let's do it:

Now we're ready to install. We've trimmed the output below, but as long as you don't get an obvious error it should be fine:

Now we can check the status of the UFW system with:

Before we go too far, let's enable incoming SSH using a shorthand for known protocols and set default policies to reject any unspecified incoming connections and allow any outbound connections:

At this point, we can now enable UFW and be protected against incoming connections on running services:

When we run this command there is no disruption to existing SSH connections. Now we can open the ports for web traffic (as we did with Civo's Firewall feature earlier). This time we'll specify ports and protocols:

Again, we can check the current status of UFW with:

To remove a rule, you can just run the same command to allow it, but with delete inserted before the rule description:

Finally, if you want to disable the firewall and completely leave the instance back in its default "everything open" state:

Using the Civo platform API call to move a public IP address, you can write a simple high availability script. Using a VPN to connect to your Civo instances

There's an easy script written by Lin Song that sets up an IPSec VPN server that you can run to create a VPN on an Ubuntu instance to be able to access your Civo instances.