Through this tutorial, we will explore how to manage SSH access with the Hashicorp Vault by beginning to understand the problems associated with the traditional approach and how the SSH architecture can be utilized.

Problems with the traditional approach

The traditional approach for managing SSH access has a range of key problems such as:

The SSH protocol implementations come with many configuration options, but usually, these configurations are not commonly used. One such configuration which we use here is sshd AuthorizedPrincipalsFile.

HashiCorp Vault is an identity-based secret and encryption management system. A secret is anything that you want tight control access to, such as API encryption keys, passwords, and certificates. The Vault provides encryption services that are gated by authentication and authorization methods. 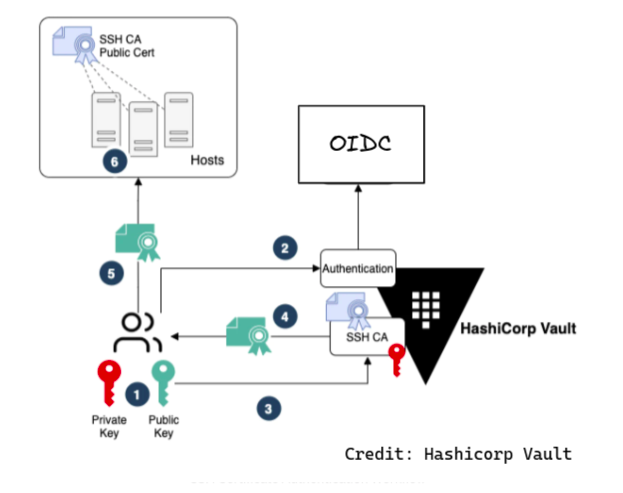 The numbers in the diagram above represent the following steps:

There can be multiple vault roles with levels of permissions. So the SSH certificate can be signed with different parameters and principles depending on the vault role. Once a user successfully authenticates the Vault, a Vault token will be dynamically generated with an attached policy that dictates which services and secrets can be accessed by the user.

We will use helm to install Vault with Highly-Available mode on our cluster. To use the Helm chart, add the Hashicorp helm repository. Before installing Vault, create a Kubernetes secret vault-serviceaccount with the serviceaccount created above. We will mount this secret inside Vault to access the serviceaccount for auto unsealing and OIDC authentication:

Use the below values.yaml file in the command:

Once Vault is installed on your cluster, it will create a Kubernetes service called vault-ui of type LoadBalancer with a public IP address. Now exec into one of the pods (vault-0, vault-1, vault-2) and initialize the Vault server:

This will start the Vault server and automatically unseals all the Vault pods. The output of the above command is significant. It contains the root_token and recovery keys. Store this information somewhere secure.

Once Vault is initialized and unsealed, we can configure Vault from our local machine (instead of running the vault command inside pods).

Set this environment variable to configure the Vault cluster from your local machine:

Now, you need to run:

From your local machine, it will ask for a token. Provide the root_token obtained when we initialized Vault (note that the Root token has access to everything inside Vault, so store it somewhere safe). Once logged in, you can run the commands below to configure Vault.

VAULT_EXTERNAL_ADDR can be your Domain name for vault service.

Now you can test your OIDC setup.

Let's assume there is a user called john@domain.com, and they are a part of the GSuite group sre@domain.com. When the above configuration is followed, a Vault login via CLI should look like the following:

These configurations should be made on a remote machine (VM) to which ssh access needs to be provided for other users in the team.

Now we can try to ssh into the remote machine we configured earlier.

SSH key management and use

You can add your SSH keys to your Civo account and use them to log in to Civo instances that have the key associated with them.

This guide will be exploring Waypoint from Hashicorp, how to use it, and setup on Civo with a demo