KubeCon/CloudNativeCon North America 2021 was a whirlwind of sessions, talks, panels, bonding, and learning. As it was a hybrid event, Civo was represented both in person at a booth that featured Sophia and David from our North American team, as well as virtually through our online booth and talks. Plus, we made an announcement of the General Availability of Civo Kubernetes at the event! 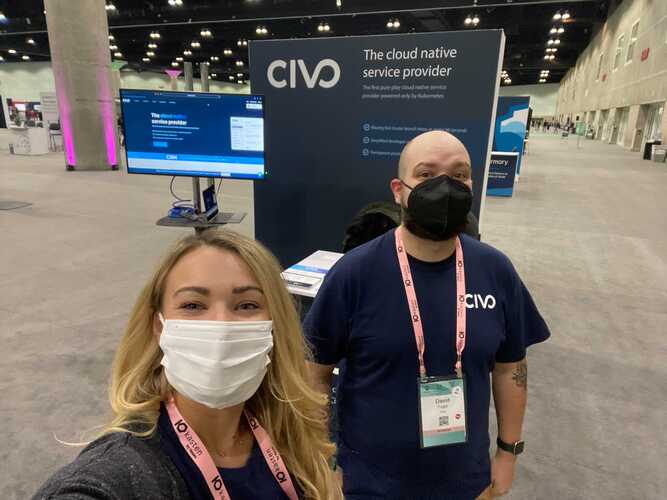 In fact, we feel we punched above our weight in our presence at KubeCon: No fewer than four Civo staff members spoke at sessions, which are now available for anyone to watch! We'll be detailing these below, along with our picks of the rest of the event – all must-see material. In addition to the sessions linked below, we held virtual office hours demonstrating Civo and the ease, flexibility and speed of our Kubernetes service. We even had a guest star in the form of Viktor Farcic showing off setting up GitOps workflows in the time it would have taken to merely start a cluster on some other clouds!

On to the sessions! These are all available on YouTube for you to watch at your leisure, so click through, sit back, and enjoy!

Unraveling the Mystery of Versioning CRDs with Harsh Thakur

First up, Civo engineer Harsh Thakur, with his informative talk titled "Unraveling the Mystery of Versioning CRDs", all about managing the lifecycle of custom resources that allow you to extend Kubernetes to suit your use case.

Marketing as Code: How to Rock Out With Non-Contributions, featuring Kunal Kushwaha

Second, our developer advocate Kunal Kushwaha was part of this excellent panel titled “Marketing as Code: How to Rock Out with Non-Code Contributions", alongside Bart Farrell (Data on Kubernetes Community), Kaslin Fields (Google) Matt Broberg (Red Hat), and Chris Short (Red Hat). A great session for anyone looking for their first contributions to CNCF projects! As they say, no contribution is too small.

Kunal also participated in another panel: "The Cloud Native Computing Foundation Mentees". This one featured ex-mentees like Kunal and Uchechukwu Obasi who is now an engineer Grafana Labs, and CNCF program managers: Ihor Dvoretskyi (CNCF) and Divya Mohan (HSBC) discussing ways of getting involved and starting to contribute to the cloud-native ecosystem and open source more generally. A great session for newbies!

How we built a cloud on K3s: The learnings of growing up fast, with Anaïs Urlichs and Alex Jones

Rounding out the talks featuring Civo staff, Anaïs Urlichs (Site Reliability Engineer) and Alex Jones (Principal Engineer) had a talk revealing a bit about our Kubernetes platform itself. Titled "How We Built a Cloud on K3s: The Learnings of Growing Up Fast" this talk runs through the advantages the technical decisions we have taken at Civo give us in providing a fast, reliable and scalable cloud platform.

Other must-watch sessions from KubeCon NA 2021

Alongside the sessions with Civo staff members, here are a few other recordings from KubeCon NA '21 that we believe everyone should watch:

Without a doubt, observability is currently the premier trend in cloud native. In this cloud native and Kubernetes observability panel, Bartek Plotka (Red Hat), Liz Fong-Jones (Honeycomb), Josh Suereth (Google), Frederic Branczyk (Polar Signals), and Rags Srinivas (InfoQ) discussed the “state of the union” and where we are with best practices.

What we learned from reading 100+ Kubernetes post-mortems

"What We Learned from Reading 100+ Kubernetes Post-Mortems" by Noaa Barki and Shimon Tolts of Datree is an exemplary session of learning from, and becoming more resilient to, incidents and downtime. As the speakers say, “A smart person learns from their own mistakes, but a truly wise person learns from the mistakes of others.”

Beyond printf and tcpdump: Debugging Kubernetes networking with eBPF

Let us know on Twitter at @civocloud if there are any talks you think we missed, or ones you think other people definitely should watch. We'll share them!

We can't wait for KubeCon Europe in Valencia next year, and hope to see many of you there!