Last month, GopherCon India 2022 was held at Hyatt Regency in Pune (also known as the Queen of Deccan and Oxford of the East). It was a great in-person event with 200+ attendees, 15+ talks, unconference sessions, and of course, lots of swag!

This blog will look at my experience at GopherCon India 2022 and some of the talks which I attended during the day.

Oh what an amazing day at @GopherConIndia today. The talks, networking, playing drums, food, brewing coffee, playing bingo and ending the day with winning a Xbox (thanks to @DeepSourceHQ for the raffle) was all worth it.🪘❤️ #GopherConIndia #GCI22

Do more with your Metrics

The first talk was by Piyush Verma, Co-founder, and CTO at Last9.io. In this talk, Piyush gave us an insight into openmetrics-exporter, an Observability-as-Code tool that reduces the effort of finding-and-combining useful metrics from layers and hundreds of other components involved in the latest cloud-native systems. This allowed Piyush to explore how the Declare-Plan-DispatchandEmit model can help you unlock Observability-as-Code. To read more about this project, visit the Last9.io website 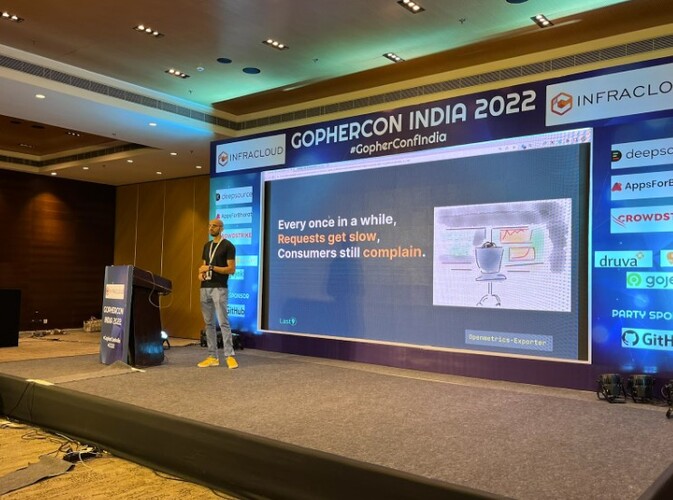 Grill - A test framework for validation of Microservices

This talk was my first experience meeting a developer who loves to write tests. Naveen Chalasani from Swiggy, introduced us to Grill, a service level testing framework used to test API's of microservices. This is achieved by simplifying the setting up of dependencies (such as databases, caches, and external service gRPC/http APIs) in local environments similar to production. Naveen also explained how this framework helped his team internally when working at Swiggy and why they decided to make it open-source for wider community use. 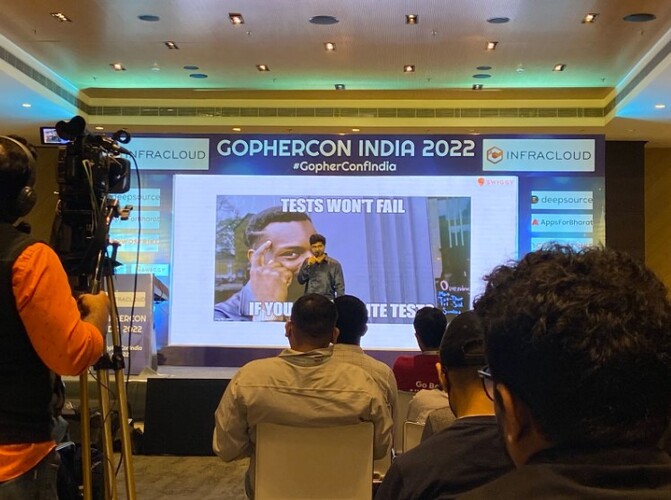 Every Go Developer has felt the pain of using the replace directive in the go.mod file of the project to test their local changes. This has made us question, do we still need to do it after Go 1.18? Probably not!

In this talk by Sushmita Wable, Senior Software Engineer at Josh Software, introduced us to Go workspaces. This is a system which means no more messing around with go.mod and go.sum files when testing local changes and no fatigue of running go mod tidy (which sometimes untidies a lot of things) time and again. Using Go workspaces will allow us to create a go.work file that effectively works the same as the replacement directive we used previously. Sushmita not only preaches about its benefits but also explains how it helped boost her productivity and why everyone should be using it. 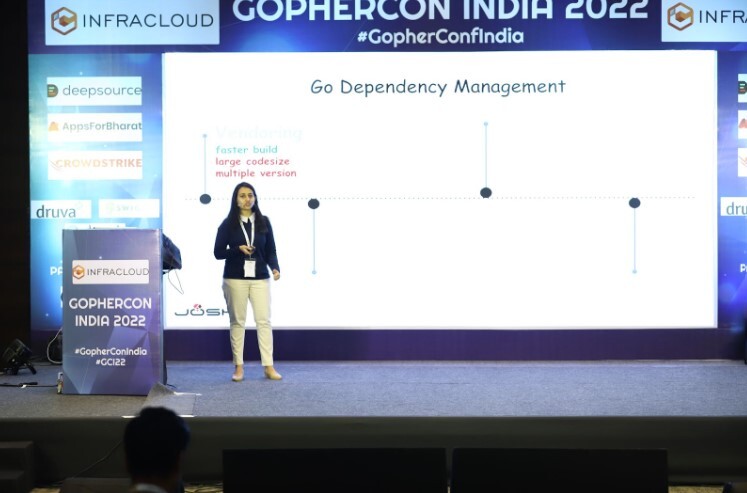 A Peek into Profiling: Custom and Otherwise

Profiling is useful for identifying expensive or frequently called sections of code. The Go runtime provides profiling data in the format which is expected by the pprof tool. In this talk, Aditi Ahuja from Couchbase, demystifies the concept of profiling for us by exploring a profile's innards, from creating custom profiles to a quick look into the source code of existing profiles and pprof. This allowed us to learn that profiles, which are often seen as the means to an end, are actually not that! 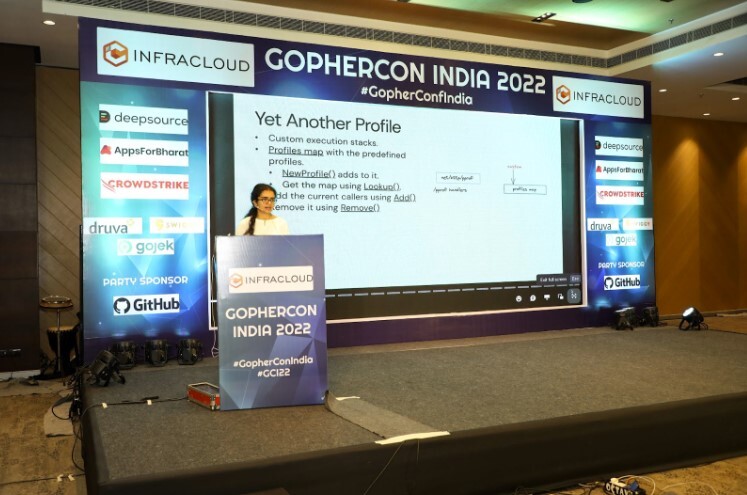 After we had finished with our mid-day buffet, we heard the sound of drums coming from the conference room... Our post-lunch energizer session was hosted by the Innovent Drum Circles team allowing us the opportunity to take part in a 15-minute session set to motivate us for the rest of the afternoon! 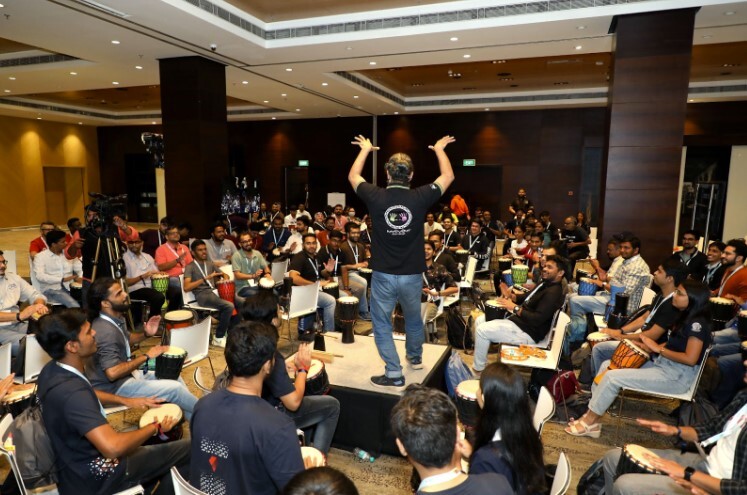 Later on in the day, we were allowed to participate in flash talks, a 5-minute on-the-spot talk that was assigned to attendees on a first-come-first-served basis. Some of the flash talks which occurred during this time were: 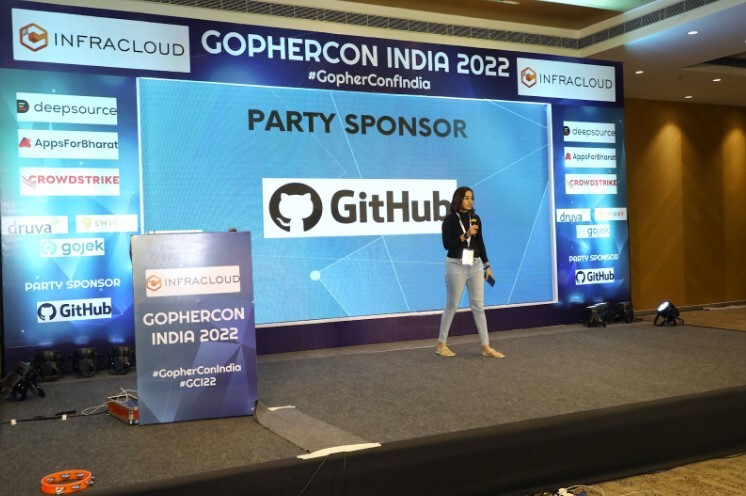 During the unconference sessions, we were given the opportunity to network with fellow Gophers and learn more about them and the work they do. This was also the time when attendees were booth crawling and participating in raffles, giveaways, and fun bingo games! We were also able to attend a coffee brewing unconference session where we were taught how to brew coffee, the different types of coffee, and all things coffee! 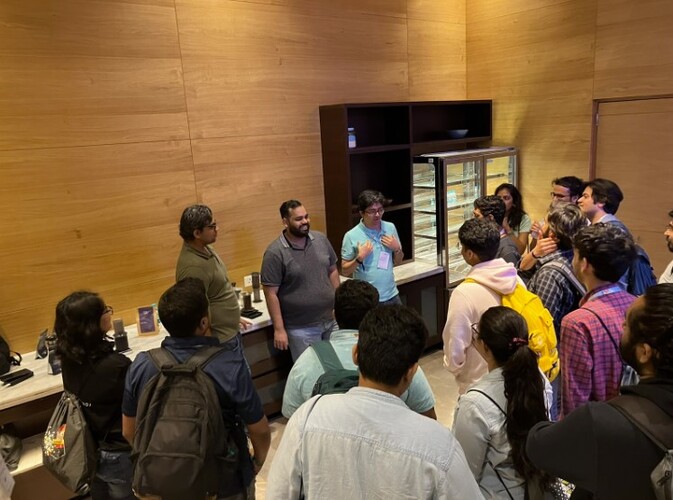 Overall, GopherCon India 2022 was a great event that provided me with a range of knowledge surrounding the Go Language Community! You can learn more about the next DevOpsDays 2022 which is happening in November this year here.