From beta tester, to building the next-gen Civo platform

There are times in life that feel like they are detached from reality. Some call it divine intervention, others use more modern, hippie-ish ways to explain these moments. Call it what you will, nearly everyone has experienced some form of this occurrence.

Some people have been short on cash and found a $50 note on the ground. Others have lost jobs only to find their dream job on the way to their car after getting walked out by security. Others realized they have lost their keys, have ten minutes to make it to an appointment, and suddenly look somewhere they would never purposely choose to look, only to see them lying right there.

I am not sure where on the spectrum my journey lately lies, but it is somewhere between the car keys and waking up in a new life.

I am in America, where our economic/job situation since March has been about as easy to decipher as a PGP encrypted message without the private key. I had found myself jobless, locked in the house because of the pandemic, with 90% of my business support clients out of business permanently. I resigned myself to unemployment, filed for unemployment insurance, and settled in for what could have been semi-permanent lack-of-stuff-to-do.

I spent the time as any engineer/techie would, on Reddit, doing nothing of value to anyone including myself. That got boring, so I build a synthesizer lab, and then created a live performance synthwave Dubstep album. 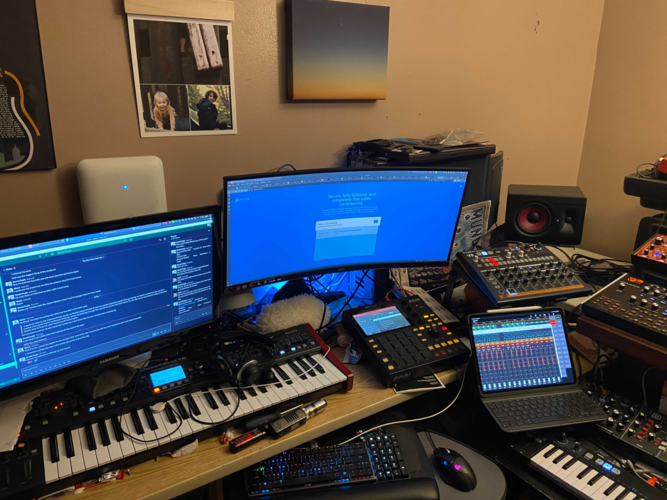 Surprisingly enough this carried me all the way from March 22, the date of our stay at home order, to the very distant date of June 1st, and I found myself bored again.

I decided it was time to keep my devops/sysadmin skills sharp, so I started building in my homelab – just little things to make life nicer around the house that I hadn't had the time to do while working 70 hour weeks. It started with a calendar for the wife and I to schedule dinner dates, then a complete rework of the network and addition of new switches. The fateful move was setting up a local k8s cluster on OpenSuse Kubic for something to keep those k8s skills from getting atrophied.

During this little bit of the journey, I decided to hit up Reddit's /r/homelab and /r/selfhosted to see if anyone had built anything interesting recently.

I saw a post talking about a company I had not heard of, that was offering beta test spots for their new managed k3s service. 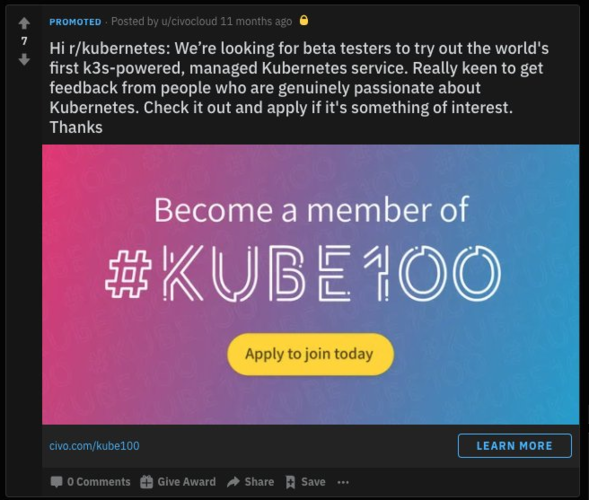 Having been a fan of k3s since its release, I was excited. I wrote my application for the program, patiently waited for my acceptance, and was allowed to "bang up the room" a little bit.

I was immediately impressed with what had been built and just how well put together and efficient everything was. I was able to launch clusters in 2 minutes or less, and have applications running on them with no effort. There was no fighting to conform my specs to the specificity required by GKE, EKS, and other platforms. Everything just worked.

So, I started asking questions, trying to explore how the team at Civo had created their system, what they were doing that made it better (short answer is: their team) than anything else, and cheaper to boot. I must have struck a chord somewhere with the company, as the CEO, Mark, started talking to me. I chatted with him a bit, and he said, "If there is anything I can do for you, let me know."

The "divine moment" or whatever you want to name it, had happened. I jokingly said "Well, if you have any need for a skilled network admin/k8s admin, consider me for the spot." Civo didn't have a spot on the team at that moment, but he asked for my resume, in case something came up later on.

I spent about a week after that conversation just getting to know the Civo team and the community members, trying to help as much as I could from my beta tester's vantage point, when Mark asked me again for my resume.

I had an interview with him and CTO Andy a few days later, and they decided that I was something that Civo needed.

I was immediately treated like a team member and friend by the entire staff. I was given a task to complete, working on a portion of our next-gen hosted k3s platform, and sent off to work. Since that time, I have grown to adore my co-workers and C-Suite members.

In the past several weeks, we have made great strides as a team, most of which are still top-secret, but very exciting for the near future. I have found myself able to provide useful work for Civo and have found a new sense of pride in my life.

I have helped construct one of the most technologically advanced products I have encountered and have re-discovered my love of blindly researching an unknown subject from the ground-up. The Civo team has made me feel at home, and I feel I have found a place where I 'belong' at. It has been fast paced, it has been intense, but it has been intensely satisfying in every aspect.

From Beta Tester to building the next-gen k3s hosting platform.

Never stop looking for your keys, a 'divine' moment may just deliver them to you.

Feel you could join the team and help us on our journey? Send your CV to jointheteam@civo.com.