Set Up a 3 Node Docker Swarm

Docker is a containerisation suite that allows you to deploy lightweight software packages in pre-made virtual machines called containers. Multiple coputers running Docker can be joined together and act as a single pool of resources. Docker released a tool in 2016 to make this easier, called Docker Swarm. There are two types of nodes in a Docker Swarm, managers and workers. Both types of node can run containers, but the manager is responsible for distributing and allocating work.

This guide will show you how to Setup a three-node Docker Swarm Cluster on Ubuntu (18.04) on Civo's cloud, deploying nginx to handle web requests for reliability and availability. It will then suggest other applications for your new swarm.

First things first, you need an account on Civo. Civo offers $250 free credit for a month to new users: Sign up here.

If you have a DNS Server you can configure the A Records for these hosts on DNS, but for simplicity, I will add the IP addresses assigned to the instances when they were created tp into my /etc/hosts file so we can resolve names to IP’s. To do this, make note of the individual instance IP addresses (marked 'public network' on the Civo dashboard), and open up the hosts file:

Now we will initialize the swarm on the manager node and as we have more than one network interface, we will specify the --advertise-addr option: ``` $ docker swarm init --advertise-addr 172.31.11 Swarm initialized: current node (siqyf3yricsvjkzvej00a9b8h) is now a manager.

If at any time you lost your join token, you can retrieve it by running the following for a worker token: $ docker swarm join-token worker -q And the following for a manager token: $ docker swarm join-token manager -q Docker Swarm uses a declarative model. This means that you define the desired state of the service, and rely on Docker to maintain this state. More information on this model can be found in the Docker documentation.

While a node may be called a manager, they will still perform worker roles! This is why all three nodes will be serving the same application. Even if a manager node drops off due to a network error, one of the workers will step up and take over management duties.

At this moment, we will see that we have no services running in our swarm: [manager] $ docker service ls ID NAME MODE REPLICAS IMAGE PORTS

We will create a standard nginx service with two replicas, meaning there will be 2 containers of nginx runing in our swarm.

But first, we need to create a overlay network, which is a network driver that creates a distributed network among multiple Docker daemon hosts. Swarm takes care of the routing automatically, which is routed via port mappings. In other words, you hit your manager node on a published port, and it will route the request to the desired application residing in the respective container on a configured node, such as worker-2.

To create a overlay network called mynet: [manager] $ docker network create --driver overlay mynet Now onto creating the Service. If any of the worker containers fail, they will handled by the manager node and will be spawned again to have the desired number that we set on the replica option: [manager] $ docker service create --name my-web --publish 8080:80 --replicas 2 --network mynet nginx The above command creates a new docker service called my-web published at port 8080, routed to port 80, with 2 replica containers, and nginx on the overlay network mynet that we just created.

Let’s have a look at our nginx service: [manager] $ docker service ls ID NAME MODE REPLICAS IMAGE PORTS 1okycpshfusq my-web replicated 2/2 nginx:latest *:8080->80/tcp We can see the two replicas are running the latest nginx just as we wanted. To see the nodes where the containers are running, we can use docker service ps my-web: [manager] $ docker service ps my-web ID NAME IMAGE NODE DESIRED STATE CURRENT STATE k0qqrh8s0c2d my-web.1 nginx:latest worker-1 Running Running 30 seconds ago nku9wer6tmll my-web.2 nginx:latest worker-2 Running Running 30 seconds ago From the above output, we can see that worker-1 and worker-2 are serving our containers for our service. We can also retrieve more information of our service by using the inspect option, which will give you a detailed response in JSON format of the service: [manager] $ docker service inspect my-web Now that we have inspected our service and can see it's running as we thought, its time to test out the nginx service.

Testing Nginx in our Swarm

On your Civo dashboard, find out the public IP address of the manager instance and copy it. On your own computer (not on any of the instance nodes) make a request against this docker node manager address on the port that was exposed, in this case 8080: ``` $ curl -I http://docker-manager-public-IP:8080

Now that you have successfully deployed a Docker Swarm application, what next? This blog covers more Docker Swarm basics and its history. For another project you could easily swap out the nginx service for an npm package to create UUIDs and scale your microservice using Swarm. Or, if you're really keen on container orchestration, you could read up on the differences between Docker and Kubernetes.

Set Up a Private Docker Registry With TLS on Kubernetes

This tutorial will show you how to deploy your own registry on Kubernetes for storing Docker images. You will also learn how to set up TLS certificates which will be issued free from LetsEncrypt.com 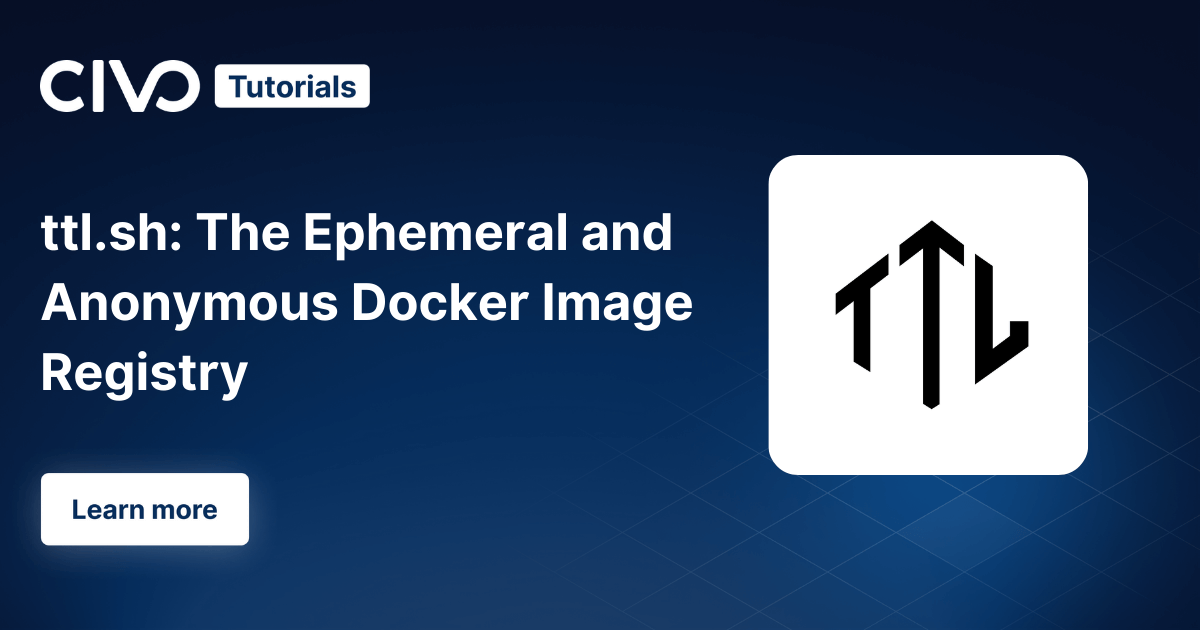 Find out how to use ttl.sh, a free to use, open source, anonymous and ephemeral Docker image registry