Yesterday, my morning started much like most Tuesday mornings do for me... my kids (6 and 4) were up way too early again at around 6am! Both were demanding I play with them before they head to school. I did my usual and said "give me five minutes" as I tried to wake up after another night of going to sleep after midnight... one day I should really learn to go to bed earlier, now that I have kids!

But this morning was different. I started to wake from my dazed state and reached for my phone. I saw a message from Saiyam, our Director of Evangelism, who very excitedly said "Big news for you!" and proceeded to tell me that we'd been featured on the Forbes website and they'd given Civo a glowing review! 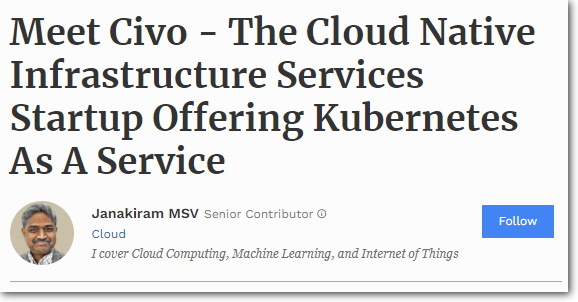 I didn't fully take this onboard at the time, mainly due to the fact that my son was in my ear wanting to play "Dinosaur Bingo". (Believe it or not, it's actually quite addictive!)

It wasn't until I got to the office after dropping the kids at school and had my habitual flat white that I had a chance to properly read the review. You can read it here.

The review was fantastic and provided an amazing reflection on what we've been building at Civo for the past few years. Our work is by no means done - we still have many things to build and improve, but it's great to see all the hard work the team has put in is now being recognised by mainstream media! Civo is beginning to make its mark.

When Civo was born, we set out to carve our own little niche in the cloud native world. Our mission is "to help simplify Kubernetes and make it more accessible to developers of all levels" so it's great to see a review which demonstrates that we're on the right trajectory.

Our longer term vision is "to develop a simplified, open cloud platform shaped by a global community in an ethical and transparent manner, while empowering positive social and environmental change." and I feel we're part of the way there too, but lots more work and annoucements to come on that soon.

Ultimately, I wanted to write this blog and dedicate this achievement to our amazing team. In some ways it may seem a small achievement, but I know the how much blood, sweat and tears the team have put in behind the scenes to get us to where we are today. To be recognised publicly in such a glowing way makes all hard work worthwhile.

To be recognised publicly in such a glowing way makes all hard work worthwhile.

Start-ups are not easy, especially in an ever competitive digital world and it's days like yesterday that just bring a big smile to your face. 😁