5 takeaways from the CNCF Annual Survey 2021

The CNCF Annual Survey 2021 is in and makes for some very encouraging reading for the future of Kubernetes and its place in the tech landscape. The 2021 survey was the biggest yet, with some 3,829 developers, engineers, architects, and C-level execs in the cloud native space taking part.

Here are some of our key takeaways…

Organizations have been moving to Kubernetes at a rapid rate. 5.6 million developers are using Kubernetes today, an increase of 67% vs. the previous year when there were 3.9 million Kubernetes developers globally.

According to the CNCFs results, 96% of organizations are using or currently evaluating Kubernetes. This represents a record high since the survey began in 2016 and illustrates how awareness and the advantages of Kubernetes are really starting to penetrate.

Kubernetes use in production is rising, especially in Africa

Anyone with a keen eye on the cloud native space in recent years may have noticed a trend of Kubernetes being utilized as a platform for testing environments, but perhaps somewhat lagging behind in production application. While this still rings true today, the gap is definitely closing.

Up to 90% of respondents in Europe are either using Kubernetes in production or are currently at the proof of concept stage. This figure is at 85% for North America, with a 55% to 30% split in terms of production vs. PoC.

Taken from the CNCF Annual Survey 2021

Perhaps the big surprise is how quickly developers and organizations in Africa's emerging tech market are putting their faith in Kubernetes. A huge 73% of respondents in Africa confirmed they are already using Kubernetes in production, with 16% in the proof concept stage. So what does this tell us?

It could be that in emerging markets such as Africa, there are fewer vendor lock-in or legacy issues to contend with? Or perhaps new, more agile providers running managed Kubernetes services (such as Civo) offer a more straightforward, more cost-effective solution than the big three?

Not everyone using Kubernetes knows they are (or even cares)

As the CNCF key takeaways point out, Kubernetes is going "under the hood," with 79% of respondents saying they have certified managed Kubernetes providers, so they no longer need to create and manage their own K8s environment.

For some, Kubernetes has become a means to an end in the same way Linux or similar technologies underpin countless devices used regularly by the non-technical masses. If it works and provides value, for some, what's happening under the hood is inconsequential.

It's almost certain that we'll see more and more SaaS and PaaS solutions using Kubernetes at their core without necessarily using it as a selling point to developers and engineers. This goes double for organizations and devices using K3s, where the application for IoT and the edge has huge potential at a low cost-point, especially in emerging markets.

Kubernetes users are willing to look beyond the big 3 providers

In the tech sector, the status quo never lasts forever. The big three cloud providers, namely AWS, Google Cloud, and Azure, have enjoyed tremendous success, alongside massive profits over the last few years. Despite this, costs for end-users are still on the rise - as recently illustrated by Google Cloud's flurry of price hikes and new fees introduced in March 2022.

While the hyperscalers have come close to monopolizing the cloud industry, developers, especially in the Kubernetes space, are happy to look to alternative providers.

The CNCF survey reports that 79% of 1,809 respondents regularly use certified Kubernetes platforms - Kubernetes "under the hood" as the report calls it. As you would expect, two of the big three make up the numbers here - Amazon Elastic Container Service for Kubernetes (39%), Azure Kubernetes Service (23%), and the now legacy Azure (AKS) Engine (17%). 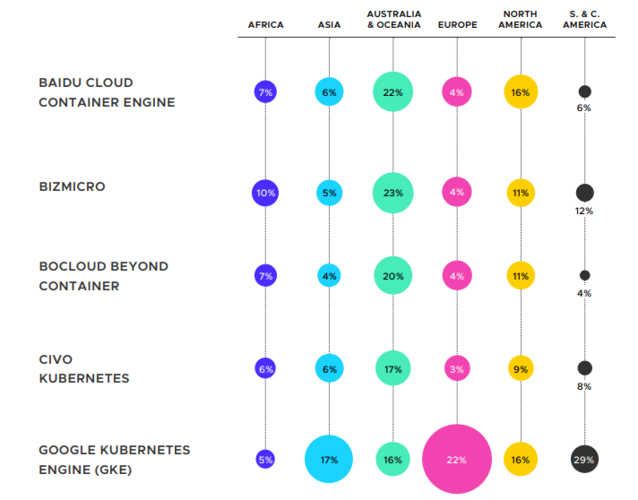 Taken from the CNCF Annual Survey 2021

However, it is buoying to see alternative providers such as Bizmicro, and of course, Civo make an appearance in the data - with 9% of respondents in North America and 6% in Asia making Civo their certified Kubernetes provider of choice - not too shabby considering we've only been in GA for five months at the time of writing.

With their deep pockets and immense infrastructure, the big three dominance looks set to continue for the foreseeable future, but there is without doubt room for more agile, cost-effective, forward-thinking providers.

Civo is listed in the survey raw data found here.

Kubernetes is the defacto standard for container orchestration

Pretty much every metric the CNCF survey reports on over the last few years is trending up - Kubernetes is here to stay.

As mentioned earlier in this article, a huge 97% of organizations are either already using Kubernetes or are currently evaluating it, with 93% of respondents either using containers in production right now or are planning to. This, combined with the fact that developers are more likely than ever to use less mature projects (Kubernetes tools and apps) to overcome emerging technical challenges, demonstrates an ever-increasing faith that Kubernetes is here for the long haul.

It's safe to say that Kubernetes has reached a tipping point in the mainstream. With that in mind, we could be in the middle of the early majority adopter stage right now. So if you're reading this and you're one of those many organizations at PoC or evaluation stages of your Kubernetes journey, it goes without saying we recommend you give Civo a try.

We're fast - spin up a fully built faster cluster faster than any other provider.

We're simple - we use K3s, a lightweight, production-ready version of Kubernetes which suits 99% of K8s use cases.